On 4 December, 1969, the American civil rights activist Fred Hampton was murdered in his bed, in a brutal dawn raid by the FBI. His girlfriend Deborah Johnson was eight months pregnant beside him and survived the attack, as did their son born weeks later. The FBI fired 99 shots into Hampton’s apartment; they’d been given the floorplan in advance by one of his trusted confidants: Bill O’Neal, a turncoat who’d infiltrated the Illinois Panthers and was leaking vital information about the movement to the feds. 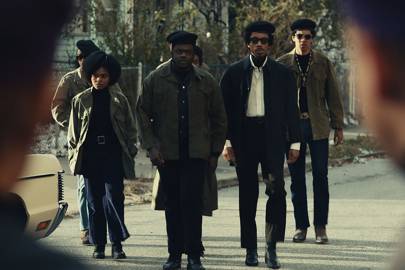 Judas and the Black Messiah is the story of that horrific dawn raid and all that led up to it. In the performance of a lifetime, Daniel Kaluuya plays the impassioned Panther, a Marxist revolutionary with a poet’s feel for language who knew all too well that he could end up paying for his activism with his life. Opposite him is a mercurial and delicately damaged Lakeith Stanfield, who plays the Judas to Kaluuya’s Black Messiah. As the film shows, O’Neal never had grand ambitions to take out a key player in the Panther movement, but was groomed into the role like a poached frog. An apolitical petty thief, O’Neal was turned by the FBI after being caught stealing a car and impersonating a police officer. The FBI offered O’Neal two impossible options: jail for at least five years, or nominal freedom as an informant embedded in Chicago’s Black Panther party. O’Neal chose the latter, sealing both his and Hampton’s fate.